Interview: Zakir Khan "BEING A MUSLIM IN INDIA" 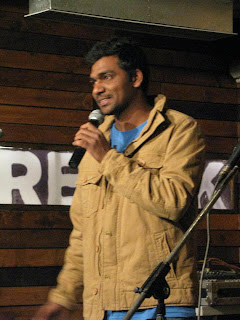 (This interview was taken for my Thesis titled "BUILDING OF A COMMUNAL STATE IN A VIRTUAL WORLD: Hindu-Muslim relation seen through the lens of YouTube and Facebook". Zakir is a dear friend. This was a result of a random discussion with him.)

While discussing about Muslims, the discussion always ends up talking about Pakistan and equating the both. This really hurts an Indian Musalman: Zakir Khan

Zakir Khan is a poet, sitaar player and a very promising standup comedian. He is currently working with Fever 104 FM Radio in Delhi. He belongs to a middle class family, and his family members live in Indore. Zakir recently wrote a radio script "Gandhi" for Fever FM, which is divided into 40 parts. Following is an excerpt of the interview with Zakir taken on 29th March 2012.

Question: As an observation, if somebody types Hindu-Muslim in the search box of YouTube, out of ten results which come 7 talks about the riots and fights between Hindus and Muslims. This also says what kinds of videos are uploaded more on YouTube. What do you have to say about this?

Zakir: When we talk about YouTube and Facebook, what concerns me more is the fact that many young kids (you can find their age in their profile- those who were born in ‘93-‘94) are very aggressive on social media. They do not know the facts. And it’s not about a Hindu kid or Muslim kid, but in general. Secondly, on social media whenever you are talking about Muslims, the debate somehow ends talking about Pakistan. This is bound to happen and it really hurts any Indian Musalmaan.

Question: I also had a discussion with a friend who was concerned because on social media people see Musalmaans of Pakistan and Musalmaans of India as one….

Zakir: And this is not right! Let me tell you one thing. When I was writing ‘Gandhi’, during my research work I got a chance to look into the history. I found when Muslims were ruling, there was nothing like a massacre which took place between the two communities. If they would have wanted they would have killed Hindus as they were the rulers, but they preferred to live together. And at that time the Hindu education system was not very prominent. I am talking about the era just before Britishers arrived. At that time Madarsas were very popular. Hindus and Muslims use to study together at Madarsas, and it was never only for Islamic studies. When Britishers came they also brought education act, which was adopted by Hindus because they did not have any prominent system at that time. But because Madarsas had religious value, Musalmans were not comfortable in adopting the new education system, more because they did not wanted to leave the old system of Madarsas.

With the emergence of the English education system in coming years, Muslims were left far behind in the race. They were not able to get any government jobs. So the only option left was to either sell fruits or do any petty work, because they did not adopted the new system and now they were already very late. So during the partition Musalmans were shown a grand vision that even if they did not get job their children will get it with the creation of Pakistan. The game of competition was being played. That time the picture was shown that Musalmaan is Pakistani.

Unfortunate partition took place. But those Musalmaans who were highly patriotic and even those who were not able to go, stayed in India. And we never had a very good relation with the new country. Nehru never trusted Musalmaans. He was ‘Pandit’ Jawaharlal Nehru. He recruited most IAS officers who were Kashmiri Brahmans. He himself had no worth, neither in Congress nor in the country. But he could speak English. He was a Britisher more than an Indian. When our constitution was made in 1950, Ambedkar gave reservation to Muslims also. He was law minister as well. This was in order to get the Muslim support. But Nehru opposed the Muslim reservation.

Question: As a young person who has not witnessed partition, what do you feel is the general perception about Musalmans?

Zakir: Today, the general response is very negative towards the Muslim community. For me, I am doing well in my life, my family members are all good, and I was given the ideas of nationalism and patriotism that’s why I am like this. I have studied in a good school and things have always been good. But what about that illiterate Muslim whom you tease addressing a Pakistani? You address him Pakistani four times, and on the fifth occasion he will reply saying, “Yes I am a Pakistani! What will you do?” One person grew up thinking he was an Indian, and now you are addressing him as a Pakistani. You are snatching away somebody’s identity from him! I saw this happening with my friends in the colony I lived in Indore. And when we were growing up it was a very volatile era altogether, the 1990s. Many things happened in the country which were communal and which really hurt the sentiments of people. So the small kids who were born in 1990s and have not seen the volatile period, do not hesitate in addressing a Muslim as Pakistani.

Question: Can you share your personal experience, where you have witnessed this negative response?

Zakir: Few small and petty incidents took place with me as well, whom I consider irrelevant in my life. Whenever there is a India-Pakistan cricket match going on, someone in my office tries to tease me. “What do you think Zakir? Today India shall win!” Why are you asking me? What do you want to prove with this question? I am not a newborn, nor am I blind! I can see and understand what you are trying to say. Somebody will talk to me sarcastically and I will not even notice? These things hurt sentiments. If we are talking about Hindu-Musalman or India Pakistan on YouTube then we are already on a war. If Muslim even talks sense and say, “Okay, let us forget what happened in the past and start afresh” he will suddenly be labeled a moron and a Pakistani! This is my observation being a Muslim in India. The Pakistani population has been taught a manipulated history. Historically wrong facts have been taught to them.

Question: when a child grows in India, studying in Indian schools, he is trained in such a manner that he is supposed to hate Pakistan. If we look at it, being unbiased, education system should not teach this. It has to be somebody’s personal decision. What do you think?

Zakir: Yes, this is precisely what we have been taught. We had a fight with china 40 years back. And even today we have chapters on Indian-Chinese brotherhood, because we know we cannot fight the Chinese.

Question: how has been your personal experience of YouTube?

Zakir: I always like to watch YouTube to know new things. I feel YouTube can certainly help in the intellectual growth of a person. But what is unique about YouTube is the fact that there are many wars already going on YouTube. There are videos versus videos. There is reply to different videos on YouTube. I personally feel it is sad if somebody is uploading a hate video, even worse is when another hate video is uploaded by the other community in reply to the earlier video. And I feel the concept of “my side is brighter than your side” is totally wrong in this respect. There are few people who are uploading videos on war level! It is the goal of their life to upload hate videos on YouTube. If you watch those videos then you will find a whole research on social media that Quran is derived from Gita. Similarly there are few people, who have an entire theory that all Hindus are Musalmaans but they are unaware of it, and all Muslims are Hindus but they have still not realized it. You can read the mentality of such person. You can understand what he is thinking, and also that he has got nothing to do that’s why he is doing such useless work!

Question: What do you feel about the viral videos on YouTube?

Zakir: I feel a video will never go viral unless there are people who like it and want to listen and view it more.
Posted by Nihal Parashar at Wednesday, May 23, 2012