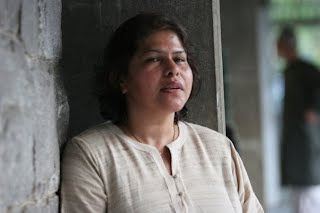 (I met Ayesha Siddiqa in Khan Market, Delhi, where she was looking for few books in a bookstore. It was Bahri and Sons, if I am right. Shivam Vij, a journalist friend, whom I wanted to interview as well, introduced me to Ayesha. I told her about my thesis titled "Building of a Communal State in a Virtual World: Hindu-Muslim Relation Seen through the lens of YouTube and Facebook". She liked the idea and agreed to give me an interview instantly. We sat in a nearby restaurant and what followed was an amazing experience for me.)


Our middle class is increasingly becoming apolitical, on both the sides of the border. They are the target of the manipulative videos: Ayesha Siddiqa

Dr. Ayesha Siddiqa is a civilian military analyst and political commentator from Pakistan. She is a regular contributor to Dawn Newspaper, where her column appears every Friday. Previously she served as a Professor of Military Science at John Hopkins University. She is author of the book Military Inc.
This interview was taken on her visit to India for a seminar. This is just an excerpt of a very rich conversation with her on 29th March 2012.

Question: When we look at social media networks, especially Facebook and Youtube, there are certain videos which are broadly classified as hate videos which are uploaded by different individuals and interest groups. How do you see that: the phenomenon of uploading videos and targeting certain groups?

Ayesha Siddiqa: I still wonder if it qualifies to be a hate video. These are manipulative videos meant to create a certain kind of result, define identity in a certain manner and to create conflict between communities, between people.

Question: So these videos cannot be classified as digital representation of the society?

Ayesha Siddiqa: No. I do not think so. See the literacy rate in the society. How much literacy we both Indians and Pakistanis have? And who has the access to the internet? Look at the poverty. We have dismal poverty figures. You are trying to tell me that a poor person in Pakistan or in India or in Sri Lanka or somewhere else in South Asia can access internet? I don’t think so. It’s a particular segment- the middle class- which has an access to internet. In Pakistan the new assessment is that out of 180 million people we have an extended middle class of 61 million people. Yours is I assume bigger than ours. So it is that middle class which is, unfortunately, the target for the manipulation because they are apolitical. Be it India or Pakistan, our middle classes are becoming increasingly apolitical. They may have an opinion but that doesn’t make them political. They are apolitical firstly. Secondly, they are into this identity mantra which they don’t even understand. The question is “where do I belong?” So the identity in that way becomes very political commodity. Used for manipulation. So that’s what social media does, most of the time- manipulate.

Question: Few days back I was reading an essay by Tagore. What he wrote was that our limitation of humanity ends at the border. It struck me! I felt that I was trained in such a way that I had to hate anybody from Pakistan. The school system does it. The videos on social media are doing the same.

Ayesha Siddiqa: See the matter is that you have the choice. You make the choice what do you want to access. You want to access coke studio you will. Secondly, what happens on internet is you open something which is totally civil, and suddenly there is another window that pops up automatically carrying something else. For example open any Pakistani newspaper website. Look for the last seven days posts and read the comments by Indians and Pakistanis. Inevitably they get into an argument and it becomes an India-Pakistan match. And then all sensibilities are lost.

My argument is the opportunities which the internet does technically theoretically provide. You have a class of people who access it, who actually don’t benefit in terms of educating or re-educating the perception. They are harvested by something which is already known to somebody.

Question: Apart from that if you go to youtube search box and just write Hindu-Muslim there, you will find 7 out of 10 results talking about Hindu-Muslim fights, Hindu-Muslim riots, riots in Gujarat, riots in other places. You will not find much videos talking about communal harmony. That somehow says that most videos which are uploaded are hateful videos.

Ayesha Siddiqa: We do not communicate and do not understand things. I cannot stand and say Hindus in Pakistan are having a lovely time. Nonsense! So the same way if somebody says India has many opportunities for the Muslims, I do not think so. And it’s a fact. Well there is a difference between India and Pakistan of course. But as Shabana Azmi puts it that she being a Muslim she has problem finding home for herself in Bombay. But she also says at the same breath- that at least she has a political system where she can contest this. But you know it is we who are literates, who are either part of the elite or the middle class, who benefit, on both the sides. And these are colonial states. They have the arrogance of the colonial mindset. And what technologies have done? I am still not arguing that these are bad. It is like Colin Gray’s book Weapons Don’t Make War, and its arguing it is not weapons but minds behind it which pushes it forward. And that’s what I am arguing as well that it is not internet per se which is bad, it is how it is being used.

Question: But what is the reason behind this phenomenon of hatred on internet? Why are the videos on YouTube full of hatred for each other- be it Hindu-Muslim or India-Pakistan? Is it also representing the general mindset of the people?

Ayesha Siddiqa: Let me share with you one incident then. It was 2002. I was coming to India for the first time ever in my life. There was something boiling inside me. I asked one of my family members, pretending to be casual, “So what do you think people in Delhi look like?” That person looked at me and said, “I did not expect this question from you. What do you mean by this? They look like us of course.”

Those days the relations between the two countries were not good. There was no direct flight. One had to go to Dubai and then take another flight to Delhi. I was sitting at the Dubai-Delhi gate at the airport. There was this woman constantly looking at me. After a while we started talking. I asked, “How long is the flight to Delhi?” She said 3 hours. And then she asked, “Haven’t you been home?” I said, “I am not from India.” She asked, “Where are you from?” Looking at her constantly, I said, “I am from Pakistan” and was waiting for her to say “devil devil”! Nothing of that sort happened and it was like, “Oh, for the first time. Then go to this and this market. Do not go to that area” and all that. I landed here and two days after I called home and said, “I am coming back!” That person (on the telephone) said, “Is everything fine? Did somebody say anything to you?” I said, “No. I am going through the painful process of demystification of India.” It was like seeing the country that you have seen in your space demonized for so long, turns out to be as ordinary as yours!

Question: I guess the same thing will happen to me or anybody else if we go to Pakistan for the first time.

Ayesha Siddiqa: Again, weapons don’t make war! It is how you use it. People watch videos of Zaid Hamidi, and it is sad. He becomes a representation for me and others 180 million people.

In 2002, when there was no direct flight, I came via Dubai. And by the time you took off from Islamabad, flight to Delhi had already left. One had to wait for ten hours for the next flight to Delhi. By the time I landed in Delhi, it was already 18 hours from Islamabad. So when I met my friends in Delhi, I greeted them and said, “Congratulations! We are not going to have war! We are no more neighbours, so no war! 18 hours to reach Delhi, you cannot be neighbours!” That was a joke. But think about it- we are not neighbours. We do not know each other. And social media doesn’t enhance that education either. I continue to see you through the thick lens of my bias and vice versa. That’s the thing which is not changing. That’s the thing which ought to change. It is dangerous also.

I remember it was 2006. I went for a talk in University of Madras. People were discussing that we do not have the generation of ‘47 that is why this Indo-Pak talk is possible. I said I am not too sure if you can write them off, the ’47 generation. They were angry with each other, but could not hate. You never hate your home. Now we have started hating each other. There is no emotional connect between each other. Now you are just passionate.

There is a professor in Delhi University, Veena Kukreja. We were interacting once after a seminar. She said her family is from Pakistan. I asked from where? Multan, she replied. That is South Punjab. I asked if she can speak Saraiki (language from South Punjab)? She said she understood Saraiki but cannot speak it. Her mother could speak. I asked if her mother was alive. She said yes. I asked if I could meet her. I met her mother in the evening. You know, few expressions that she was using were what I had heard from my own elders. Then we started chatting. I asked where did you live in Multan? She said that road, that colony et cetera. I asked her, “Aap aate kyon nahin ghar? Aayiye na.” (Why do not you come to home? Please visit sometime.). She said, “Nahi, kya karna hai aake.” (No, what will I do by coming back?)

I knew she was bitter, but she was not hateful. And when I left after couple of hours, that old lady, who was not even able to walk properly, came to see me off. Somebody had come to meet her from her home. Who will talk to her in Saraiki, in Delhi?
Posted by Nihal Parashar at Tuesday, May 29, 2012