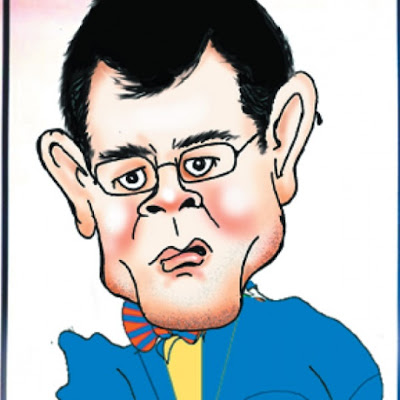 It’s serious. I am taking it as a personal attack now. Do you have any idea what you have done to me? You have spoiled my personal life. My mother is not taking me seriously. Priyanka ridicules me every now and then. Her children call me Pappu mama, and ask me if I can dance. It doesn’t stop here, they even laugh after asking the question. Even Diggi Raja is not taking me seriously. Why on this planet did you write the song “Pappu can’t dance Sala!”?

It’s been five years since you started the attack. Since then, this song is playing in mind without any gap. You are the reason behind my depression. I know everything. Diggi Raja has briefed me. You wrote this song for your directorial debut. And you projected the false fact that this film was produced by Aamir Khan. I have every reason to believe that your film was produced by RSS and Narendra Modi. Yes. You took Aamir Khan’s name only to rob me off the Muslim vote bank.

Keep politics aside Abbas. You are a young guy (at least younger than me). Do you know what has been the consequence? I am still not able to get married. Every girl I approach thinks I cannot ‘dance’ well- you know what I mean by dance? I have been unable to date girls for the past 5 years, dude, and you are the only reason for it. And to top it all, people are celebrating ‘Pappu Diwas´ and playing your song like an anthem!

Please Abbas, do not say that you were not trying to hurt me. Each and every line in the song is for me. To start with, yes, I can’t dance. I am a terrible dancer. But what’s the need to write a song about it? I can’t imagine NaMo dancing. Can you? Why didn’t you write a song on that? Imagine Advani Ji dancing (there are so many songs you can imagine him dancing on like “Enna vi na Dope-Shope mara Karo”- after all he loves to give gyaan to all), but did you write a song on this? A big NO! You targeted me because you have political ambitions dude. There are rumours that BJP is giving you ticket also from Amethi. Wait! That’s where I fight elections from! You are trying to screw me big time!

And this line in the song- “Pappu kudiyon me craze hai / Pappu ki aankhein light blue / PAPPU DIKHTA ANGREZ HAI”- you are targeting mummy also! This is unbearable! And further you wrote “Paida Pappu hua to kismatein chamki / Aur uske muh me thi Chandi ki chamchi”- you are getting too personal. How did you know that I had a silver spoon when I was born? It was gifted to Dadi ji by a known businessman. But how did you know? Simple, RSS gave you information about this, right? They are such a pain in the arse!

But I cannot forgive you for the last line you wrote- “Papa kehte hai bada naam karega / Mera Pappu to aisa kaam karega”! You know this is not possible. You are trying to ridicule me, just like everybody on twitter!

Abbas, you look decent. Why this enmity with me? Let us become friends and believe me I have so many songs you can use against that NaMo fellow. See, basically I wanted to be a lyricist in film industry. But because of the family pressure I had to join our age old Family business. But I am a poet from my heart. Okey, to cut short why don’t you use this song in your next film, “He can’t sing, he can’t dance / He doesn’t have a Rado watch / Looks like a dirty fellow / NaMo wears shirt of yellow!”- I know you loved it! I have a full song to share.

Dude, let us end this enmity and fight against fascism. After all your film also had this message, right? Do not think much. I also think less.

Waiting for your reply,


This article was first published in Youth Ki Awaaz under the category Pun Intended on June 20, 2013
Permalink: