Habib Tanvir and His Message for Contemporary Theatre Practitioners

They say he was great. They say he gave new meaning to Indian Theatre. They say no one can be like him. But what did he think?

He thought that there can be many like him, or even better than him, if people work with a simple ingredient- honesty. 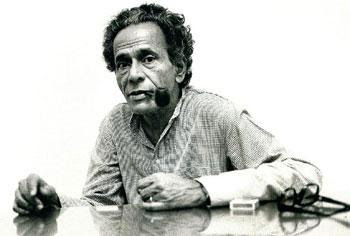 Habib Tanvir defines theatre to a great extent in India. He will be remembered for many years to come for the magic he created on stage. His iconic play ‘Charandas Chor’ has been adopted and performed innumerous times. Same goes for ‘Agra Bazaar’ based on the life and poems of Nazir Akbarabadi, a lesser known 18th Century Urdu poet. Another play, ‘Bahadur Kalarin’, has a universal theme but has a setting of tribal India. His stories had global connotations while still retaining the local flavor; they discussed extremely complex behavior of humans but in the most simplistic manner possible on this planet- trait of a true genius.

In the memoirs he wrote in one of the editions of ‘Charandas Chor’ (2004, Vaani Prakashan) he shared many untold stories behind the play. Like a true story teller he not only presented stories in front of the readers but also puts his thoughts on various aspects of theatre, society and life, in a subtle manner. The memoirs are extremely important and is a must read for any theatre practitioner. These are not words and sentences but treasured documents which will be the guiding lights for generations to come.

In one of the sections of the memoir, he shared his experiences of the first tour to Europe with Naya Theatre, the theatre group he founded in the year 1959.

It was August 1982. It was Naya Theatre’s first tour to any foreign country. They were invited at the prestigious Edinburgh Theatre Festival. There were 52 plays from all over the globe, ‘Charands Chor’ being the only play from India. It was called ‘Charan-the Thief’ in English. Surprisingly- for Habib Tanvir and the entire group- it was awarded Fringe First Award at the festival- one of the most prestigious awards for theatre.

People asked Habib Tanvir how this could be possible? The auditorium hardly had 10-12 Indians, most of the people were from Europe and other countries! They did not know Hindi,Chattisgarhi was an alien language to them! He answered back, “I was watching the play from the lighting booth till interval, after which I went to perform my part in the play. I saw theChattisgarhi Folk artists were playing their characters as if they were acting in their village and assumed that every human understands the language of other human. This confidence and attitude allowed them to create magic. If this is not the reason then I do not know the reason.”

The play had created a wave of newness in England. Everybody wanted to see the play again and again. The newspapers were full with reviews and praise for the play.

Habib Tanvir also shared with the reader how the play was called to England for the performance. Peter Brook, renowned theatre and film icon, had recently visited India and in one of the interviews he gave to London Times he talked about the great work Naya Theatre was doing in Delhi. He was in India for his research on the epic ‘Mahabharata’. He had attended few rehearsal sessions of ‘Charandas Chor’ and ‘Lala Shohrat Rai’ (based on Moliere’s ‘Bourgeois Gentleman’) by Naya Theatre group members. This contributed in another wave of publicity for Habib Tanvir and Naya Theatre in England. David Gothard, the then Director of Riverside Studios- one of the most prestigious theatre houses in England- after reading the interview decided to call Naya Theatre to England.

Government of India used to finalize the play to participate in ‘Festival of India’ organized in England, which had nothing to do with Edinburgh Theatre Festival. The government officials had decided to send a play from NSD directed by Ebrahim Alkazi. Because David Gothard was keen on calling Naya Theatre, he did not consider the play selected by Government of India. Ebrahim Alkazi’s play had to participate in the London Commonwealth Theatre.

Habib Tanvir wrote, “Some 30-40 people used to go for the NSD’s play every day in an open auditorium which could accommodate 500 people. As a consequence not a single newspaper wrote anything about that play.” At this very time ‘Charandas Chor’ or ‘Charan-the Thief’ witnessed back to back houseful shows in England.

Habib Tanvir elaborates the discussion and gives a very insightful take on the entire episode on why Alkazi’s play was discarded by the English audiences. He wrote, “People may think why I am sharing this for the first time after so many years? One of the reasons is that I was never fond of ‘Elitist’ theatre which has an element of ‘imitation’ in it. Performing in England what you have learned from England! Why? Alkazi and me, both studied theatre at England. He was comfortable with English but not with Hindi, which was not his natural language. This was evident in his theatre as well. And I had come to the conclusion ages before that any theatre which tries to imitate other culture is not a true theatre- it is false. Theatre needs to be presented in such a way, using the local flavors form the society and culture one belongs to, that people from other parts of the world think “this is also a kind of theatre which needs to be explored”! We may like theatre from other countries- it may have all the ingredient of a great theatre- but the moment we try to imitate it, it will lose its magic. It means the theatre which has the ability to transcend local barriers and go global is also the same theatre which never loses the local flavor.”

He also wrote that he never shared this before because people in the same profession hesitate in speaking the truth about their friends and professional colleague who may not like criticism or, simply put, truth about them. This could also lead to many misunderstandings which he wanted to avoid that time, but years later it was the time to let the younger generation learn from the mistakes of older generation and create better plays.

Message for the Contemporary Theatre Practitioners

Habib Tanvir’s message holds extreme relevance for the theatre practitioners of the present generation. What Tanvir said was a result of what he experienced. He also said that there are good theatre practitioners in the present generation as well. We may have less ‘true theatre’, but the good thing is we are creating good plays which are original and relevant for the era in which we all are living. 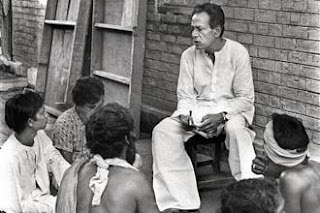 Theatre, like any form of art- especially literature- is a reaction to the prevailing situations of a particular era. This reaction can be in form of absurdity, comedy, realistic- any genre for that matter. But if theatre practitioners react to the complexities of another era or culture or society, how will it be relevant in the long run? And more importantly how will they be able to react to complexities alien to them?

These are few questions Habib Tanvir puts in front of contemporary theatre practitioners who will not only entertain the present era but will present answers to the complex questions the future generations will have to understand our time.

We hope our answers are right, and only time can judge them.


This article was first published in MyTheatreCafe.com on May 25, 2013
Permalink:
http://www.mytheatrecafe.com/habib-tanvir-and-his-message-for-contemporary-theatre-practitioners/

Email ThisBlogThis!Share to TwitterShare to FacebookShare to Pinterest
Labels: Arts and Literature, My Theatre Cafe, Theatre